skip to main | skip to sidebar

To Sicily and Cyclops 14th-17th June 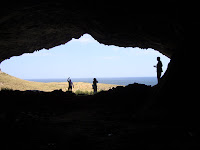 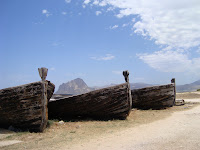 Tuna fishing boats, on the shore near Pizzalongi. Tuna fishing stopped ten years ago, and the boats have been left to rot. 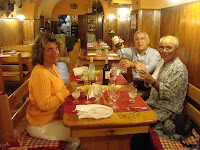 Birgit, Antonio and Andreas, enjoying dinner in Antonio's favourite restaurant in Trapani. Food is glorious in Sicily, and stuff that would cost a small fortune in a deli in London is remarkably cheap here.

Corfu to Palermo in 24 hours....overnight by ferry to Bari on the SE coast of Italy.... then trains from the heel to the toe of Italy....the train is carried across to Sicily by ferry and then goes straight on to Palermo. A marathon, and we didn't really wake up until we arrived at 10.30pm at Palermo Station. But three cheers for Greek and Italian public transport; it really does get you there, no hanging about, and at a fraction of the cost in Britain. Our first impressions of Palermo when we walked around next morning were not encouraging. It looked poor, down at heel and very dirty, despite the occasional glorious building. We were keen to get out as soon as possible, and by lunchtime had decided that our best option was to take a bus to Trapani on the West coast.

We were still half asleep when we arrived at Trapani, mid afternoon. The heat was bouncing off the concrete pavements, and Sabrina needed a loo fast. There were no obvious places of refuge and then, when we were already fervently wishing that we hadn't come all this way, we saw a single sign for 'Bed and Breakfast' on the wall of an apartment block. A man, who we later knew to be Antonio, answered the door and showed Sabrina up to a rather elegant room. He gave a price which was alot more than we had been paying in Greece. Should we stay?.... We pondered outside and then rang the bell again to ask some more questions. Antonio did after all speak English, which was a rarity in Sicily. We wanted to go to Pizzalongi, about 12km further down the coast. Did he know if there might be a B&B there? He didn't. Were there any buses? No, there were not. Why, Antonio asked us, did we want to go there? Embarassed pause...we wanted to see the Cyclop's cave. Ah...would we please let him know by 5pm if we wanted the room.

From there on things got better by leaps and bounds. Antonio, it turned out, was very into the local myths and legends. He offered to take us to the cave in his car the following day, along with his other lodger Birgit, a very nice customs officer from Brenen. Both got into the spirit of discovery, and Antonio laughed alot. The cave wasn't too hard to find. Pizzolongi turned out to be a small hamlet of holiday homes with two streets, named Via Cyclops and Via Polphemus, running up the hill to a ridge of cliffy limestone rocks. Following one of these we came to a small overgrown path leading up to our cave. An information board outside it told us that it had been occupied by stone age people (flints and animal bones had been found there), but there was no mention of a Cyclops. It was a very fine cave, easily big enough for a Cyclops and his flock of sheep and goats; and there were many other caves along the ridge. Even if you couldn't quite believe that one-eyed giants lived in the area, it was interesting enough that our stone-age ancestors, and perhaps even some Neanderthals, had made their homes here.

Antonio showed us more places of interest, and then sent Birgit and ourselves off on a bus trip up the hill behind Trapani to a mediaeval town, Erice, which also been occupied since time immemorial. On a clear day you can see Tunisia from here. It wasn't that clear, but we could see the islands of Favignana and Maretimo, which both feature in the Odysseus story, and we were content with that. We left Trapani the next day feeling we had made more friends and had a very good time.
Posted by A&S Odyssey 2008 at 11:58 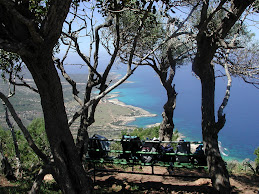 Odysseas probably did not come here, but we think it catches the spirit!